As is often the case on these journeys through foreign lands, there is a sense of anticipation and even unease prior to the first slackline workshop. We know not how people will react – be they the locals, the authorities, the onlookers. Slacklining is a pretty beguiling and strange activity at first (and 5000th) glance. As Arthur C Clarke wrote, “Any sufficiently advanced technology is indistinguishable from magic.” Make no mistake, this highly wound nylon and steel carved metal work is pretty damn advanced when you really take into account all that it took to engineer these materials; these gadgets; this magic. Though it’s not until you combine them that the alchemy truly becomes apparent.

Creating a temporary, extremely narrow (one inch) bridge hovered over the Earth from one point to another, the webbing becomes a dynamic path on which you mount and attempt to maintain balance as you usher your way across. Eventually you realize the purpose is not just to walk on it, but to test a variety of maneuvers and holds. When you’ve really gotten a feel for it and feel adept on the line, it does begin to feel like magic. And you, a magician. Each time you set up a line you are stepping into a metaphysical (but VERY physical) dimension in which your soul purpose is waging peace, uniting the forces of yin and yang in perfect balance. You are the elastic being which binds the end points together and allows them to push and pull one another, exploring infinite space atop a linear plane.

Invariably when you set up a slackline and hop on and test your limits people will beckon, seeming to come out of the woodwork in droves. People want to watch (or better yet, try it themselves). And the magic that the spontaneous community building creates is contagious and beautiful. Empowering, pacticipatory, communal, unifying. Translinguistic and transcultural, this universal communicator is a portable, transcontinental community gathering space. 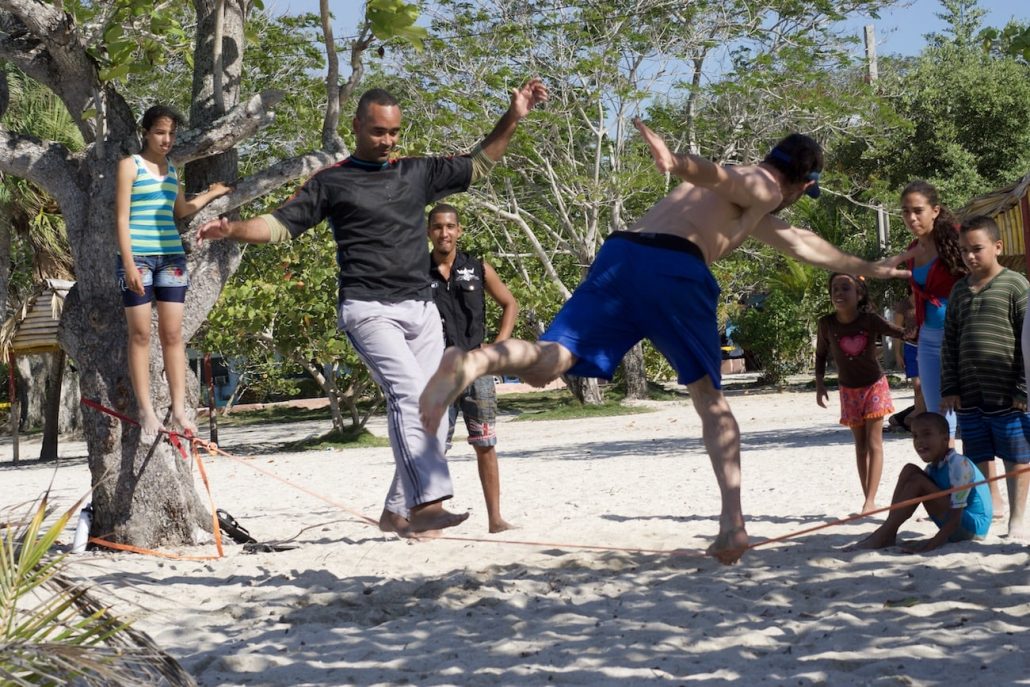 So there is a great power in this webbing, caribiners, and chain ring, and we feel a bit like Frodo and the Fellowship bearing the One Ring. The chain ring of power. We feel like King Arthur and Excalibur. It’s well understood that the second we unsheath the slackline and set it up that there are great responsibilities and energies at play. We are sharing something so near and dear to us that to be able to give this great gift to people in foreign lands – people with their own passions, plans, and pasts – is a tremendous and beautiful privilege.

And there we were, on the edge of the island, taking a break from our ride and having found our first Cuban beach, we hid from the sun and sought nourishment. Soon joined by some very friendly folk, they saw the bikes and asked what we were up to and after we described the project they enthusiastically asked if we would teach their church group to slackline. The pastor was laughing hysterically, and GUNG HO urging us to do it. I wasn’t so keen as it was blazingly hot and we had in our minds the general regions we had intended to hold workshops and gift lines and this beach wasn’t necessarily one of them. We intended to plant the slackseeds with a generous spacing between locations and this church group’s hometown of Manzanillo isn’t more than 140 kms from Holguin, where we began the trip and where we planned to teach our final slackshop upon returning. I was caught up in the aesthetics of the map points and a healthy dispersal of the slack power throughout Cuba’s Oriente. But we had opened Pandora’s Box by even mentioning this absurd activity that they knew nothing about and they were EAGER to try. In fact, the pastor would t take no for an answer. Despite my stubbornness, we were soon persuaded. At the very least we figured we’d share with them the slackstoke, have some fun, but pack up the line and donate it elsewhere as planned. 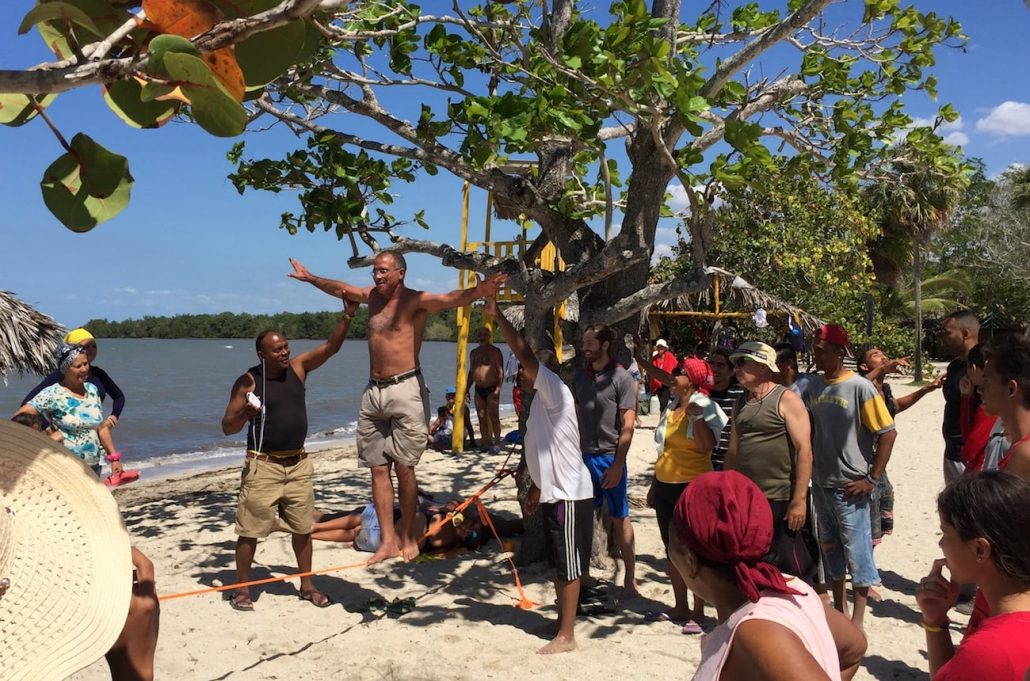 Once the line was set up the crowds formed, full of supportive and happy energy, people of all ages AND plenty of girls and women all attempting to slackline (and some even slacklining for real ((without hands spotting/supporting them)). Seeing all of this positive energy and participation we realized we HAD to gift them the line at the end of the workshop. We even ended up dueling with some super fast learners; one of whom, a man who at first was shrugging it off and saying, “No way will I try that!” was by the end of the session dueling with us and others and landing jump starts, full lotus positions, and surfing.

When we informed the pastor that we wanted to gift his church the slackline, he seemed really pleased. THEN, when he announced to the large group that had played and bonded so well around this slackline, that they would be receiving the line as a gift, a great cheer and applause erupted. Joy reigned supreme! And we beheld what we had together made. And it was very GOOD.

Slackstars birthed. Contacts exchanged. Slackline scene created in the nearby beach town of Manzanillo, home of this group from the Church of Nazareth. And now there may yet be pilgrimages to a new Nazareth: Media Luna beach – North of Niquero and South of Manzanillo. the birthplace of the first Cuban slackline savior. 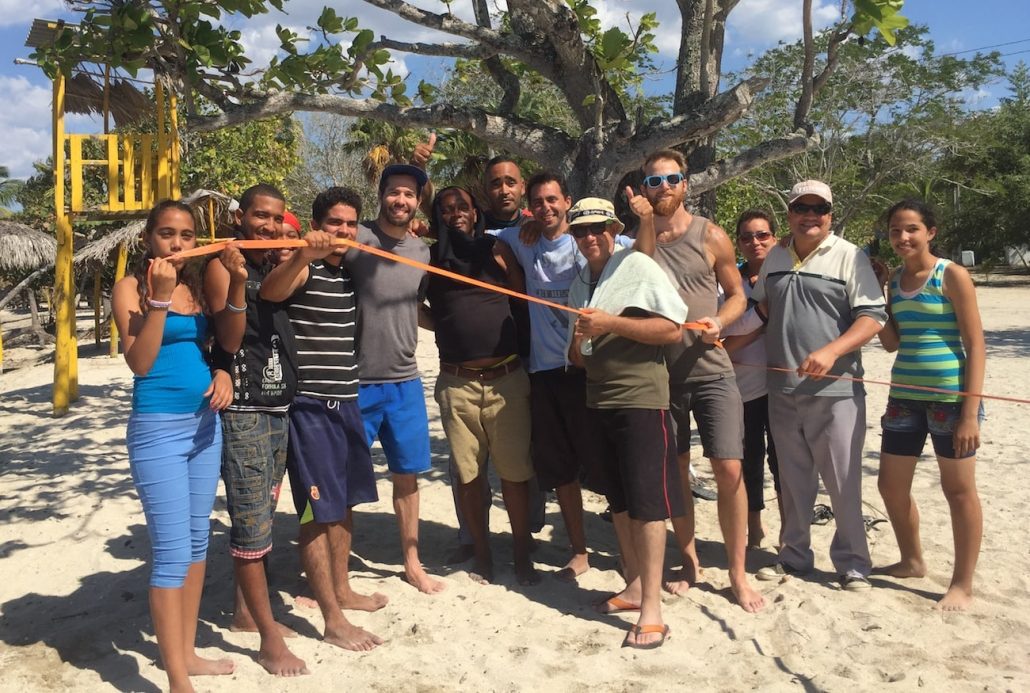 Go back to Cuba Map